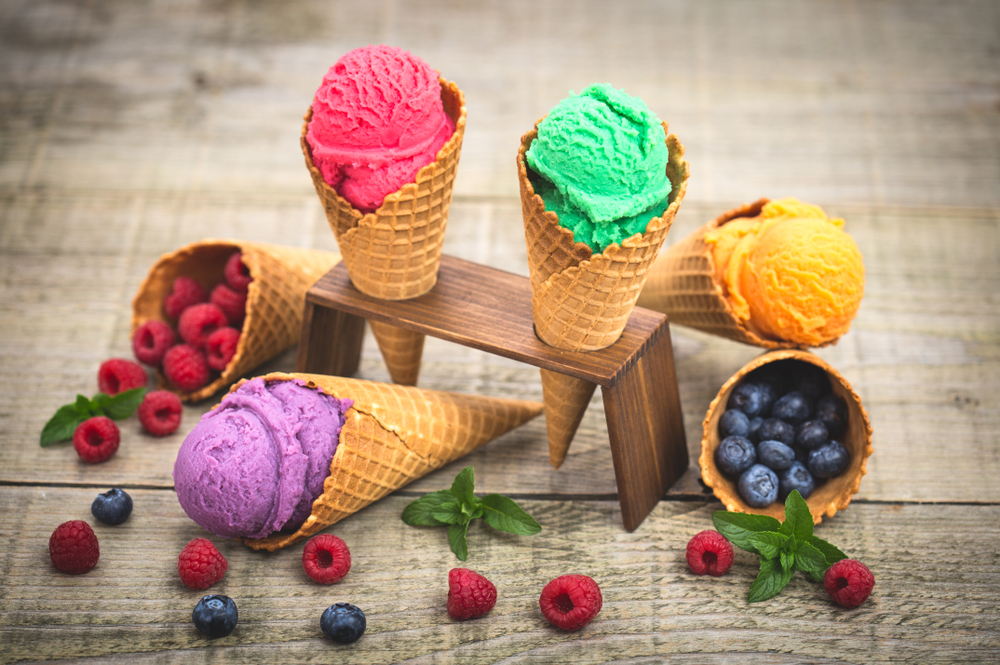 Interest in ice cream is heating up. Fresh flavors and innovative ingredients are driving demand for the frozen treat to new heights, with the global ice cream market expected to reach a $114 billion value by 2030.

Although some might argue over the best types of ice cream and the best ice cream brands, there's no debate that few foods go better with summertime than a cone, cup, or bowl of ice cream.

In honor of the delicious dessert, we're ranking the 50 best cities for ice cream and shouting out some of the best ice cream shops. To create our list, we analyzed price data, city geography, and internet search activity, weighted in the following manner:

Get the full scoop on the best ice cream cities below:

As a group, the top 15 metros for ice cream stand out because of:

Oklahoma City locals have no shortage of spots to indulge in ice cream. The city has 5.7 ice cream shops per 100,000 people, the fourth-highest mark on our list. That includes multiple locations of Braum's, a popular regional chain first started in the city in the 1960s.

Google Trends data provides a window into Oklahomans' favorite types of ice cream. No metro on our list has higher search activity for sherbert, and the city ranks second in interest for chocolate and vanilla ice cream.

Fortunately, locals don't have to travel too far to find a cold cup of soft serve. New Orleans has an ice cream shop every 2.6 miles, the 10th-best mark on our list. Locals can find colorful creations at spots such as Ice Cream 504 — open seven days a week so you can enjoy dessert Monday through sundae.

No matter what flavor you're looking for, there are plenty of places to score ice cream in Sin City. Las Vegas ranks No. 2 in ice cream shops per capita with 7.8 shops per 100,000 residents — compared to 3.4 in the average city we analyzed.

If you're in the mood for gluten-free ice cream, you can find it made from scratch at Paradise City Creamery, a boutique ice cream shop in the city's arts district.

San Jose residents don't have much trouble getting ahold of the frozen desert. The city ranks No. 3 in ice cream shops per capita (7.1 per 100,000 people) and No. 4 in access to ice cream, with a shop every 2.5 miles.

San Jose residents are big fans of mochi — the rice-cake-ice-cream combination. Locals search the web for mochi more often than residents of any other city on our list.

There's no limit to what ice cream fans can sample in San Jose, especially if they're enjoying the unlimited toppings at Icicles.

Fortunately, Providence has the ice cream infrastructure to meet its demand. The city has an ice cream shop every 2.6 miles, the fifth-best mark on our list.

Providence also performed above average in our variety metric with a score of 85.5 out of 100, indicating residents often search the web for a wide mix of ice cream flavors and styles.

Raleigh also has relatively cheap ice cream prices, with a small cone of Ben & Jerry's costing $4.15 — better than the national average cost of $4.50.

The city shows a high level of interest in ice cream. Raleigh residents frequently search the web for general ice cream terms, earning the city an interest score of 85 out of 100 — an improvement over the average city's score of 79.1.

That interest in ice cream is no surprise when locals have shops such as Raleigh Rolls in town, home to some of the best-looking ice cream east of the Mississippi.

In addition to a high volume of ice cream shops, Salt Lake City residents have a strong passion for a mix of ice cream styles. That's demonstrated by a variety score of 91.8 out of 100, sixth-best on our list.

In addition to those fan favorites, fresh flavors are always on the way. Cloud Ninth Creamery even allows customers to flex their creativity by submitting ideas for new flavors.

Additionally, Austin has the seventh-warmest average temperature in our study, making ice cream especially appreciated as a sweet treat for relief from the heat.

It's not too hard to stumble upon an ice cream shop in Boston. With a store every 2.6 miles, Boston outperforms the average city in our study, which has a store every 4.3 miles.

Dunkin' culture has clearly made an impact on the New England metropolis: Bostonians rank No. 1 in search interest for coffee ice cream. Locals looking for coffee ice cream can find it, as well as other delicious desserts and actual coffee, at popular area chain J.P. Licks.

Along with easy access to ice cream shops, Philadelphia is an affordable place to pick up an ice cream habit. Buying one cone a week for a year would run residents 0.31% of their annual salary — better than the typical city we studied (0.33%).

Judging by the high rate of web searches for general ice cream terms, Philadelphians are frequently in the mood for ice cream. The city earned an almost-perfect ice cream interest score of 99.3 out of 100 — well above the average city on our list (79.1)

Hartford has a few favorites when it comes to different types of ice cream. The city ranks No. 1 in search interest for chocolate chip cookie dough and No. 3 for coffee ice cream.

Overall, Hartford earned a near-perfect ice cream interest score of 99.7 out of 100 — the third-best on our list — as a result of residents often searching the web for general ice cream terms.

Locals searching for quality ice cream can find it at Capital Ice Cream — home to some of the best-looking ice cream in the Northeast.

It's fitting that the city sits on the Ohio River, as residents have an affinity for ice cream floats. Cincinnati ranks fourth in search interest for the popular ice cream beverage.

Web searches for general ice cream terms are especially common in Cincinnati, earning the city an interest score of 92.6 out of 100 — better than the typical score of 79.1.

Some of Ohio's highest-quality ice cream can be found in the city, as evidenced by the handmade ice cream and Italian Ice at Aglamesis Bro's and first-rate rolled ice cream at Simply Rolled.

There are several frosty desserts that see frequent search interest from Portland residents. The city ranks No. 3 in interest for dairy-free ice cream and sorbet, as well as No. 4 for chocolate ice cream and frozen yogurt.

Fantastic frozen yogurt can be found at Portland's Eb & Bean, which carries organic dairy flavors and plant-based varieties made with almond, oat, and coconut milk.

As for ice cream, What's the Scoop? boasts a rotating list of creative flavors made from scratch, including several options with liquor.

Overall, Portland locals have an easier time affording ice cream than residents of the average city we studied. Buying one cone a week for a year costs Portlanders 0.3% of their typical salary, better than the average city in our study (0.33%).

San Diego earned its 100 out of 100 variety score thanks to ranking No. 1 in search interest for rocky road ice cream, gelato, and frozen yogurt. It also comes in at No. 2 for vegan ice cream.

Given its low prices, Kansas City also ranks high in our affordability metric. Buying one cup each week for a year would cost locals 0.3% of their annual salary — slightly cheaper than the national average (0.33%).

Kansas City would've ranked higher on our list, but ice cream shops are relatively few and far between. There's just one every 6.6 miles, while the typical city we studied has one every 4.3 miles.

On the bright side, Kansas City's ice cream scene puts an emphasis on quality over quantity, with unique spots such as The Golden Scoop — a nonprofit ice cream shop that hires people with developmental disabilities.

Not every city is a sweet spot for ice cream. The cold, hard truth is that the following metros ranked at the bottom of our list:

The bottom 10 cities stand out because they have:

Memphis ranked last because it has:

On the bright side, a single small cup of ice cream in Memphis costs $4.11 — cheaper than 39 other cities we analyzed.

Home Bay compared the 50 most-populous U.S. metro areas across a number of metrics, listed below. Each metric was normalized and then graded on a 100-point scale. The combined weighted average of the scores determined the “ice cream city” score upon which the final ranking was based.

What city has the most ice cream shops?

What are the best ice cream brands?

As of 2021, Ben & Jerry's is the top-selling ice cream name brand in the U.S., followed by Häagen-Dazs and Blue Bell, according to Chicago-based market research firm IRI. Learn more about the best ice cream cities.

What are the best types of ice cream?

The most popular ice cream flavor in the U.S. is chocolate, with vanilla in second. Strawberry, mint chocolate chip, and butter pecan tied for third, according to a 2020 YouGov survey. Learn more about the best ice cream cities.