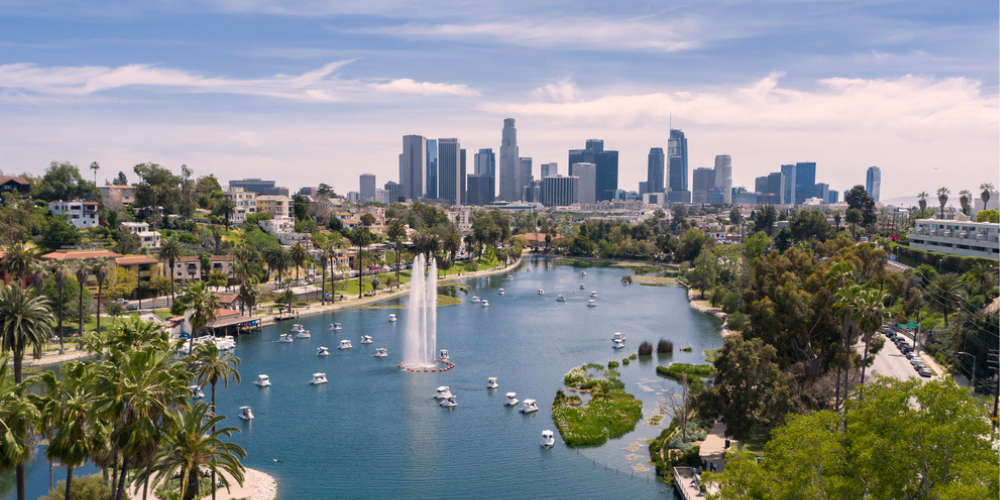 People love Los Angeles for its sunny weather, diverse culture, and beautiful real estate. It’s no wonder that almost 4 million people from all over the world currently live in L.A. According to the L.A. Times, the massive city is home to 272 neighborhoods — each with unique attractions and amenities.

One thing all of the best L.A. neighborhoods have in common is proximity to great schools, parks, and businesses. But these benefits come at a price. The best neighborhoods in Los Angeles vary widely in terms of cost, but the average home price in the area is close to $1 million.

We compared some of the most popular L.A. neighborhoods to find the best places to live in Los Angeles based on attributes like walkability, school districts, and proximity to amenities. Our list is in no particular order — we encourage you to dive in and find the neighborhood that suits your personal lifestyle and finances best! Learn more about where we found our data.

If you’re considering moving to L.A., you’ll need an experienced local real estate agent to help you figure out which of the 272 L.A. neighborhoods is right for you. That’s why we’ve partnered with Clever Real Estate.

Clever can connect you with top agents in L.A. from major brokerages like Keller Williams, RE/MAX, and more. And in California, you can get 0.5% cash back after closing on a house, just for using a Clever agent. On a million-dollar home, that’s $5,000 back in your pocket.

The housing market in L.A. isn’t known for being cheap, so any bit of cash back can help!

L.A.’s population of millions comes with its fair share of crime. However, many people are surprised to learn that L.A.’s crime rate is lower than that of other large California cities, like San Francisco.

There were 29,400 violent crimes and 95,704 property crimes reported in Los Angeles in 2019, and the city is ranked 67th in crime per capita across California, which means it is nowhere near the most dangerous city in the state. In contrast, San Francisco ranked third for crime per capita in California in 2019. The San Francisco Bay Area also had the highest rate of property crimes in the state in 2020, with 2,608 incidents per 100,000 residents.

Still, the crime rate in L.A. has been on the rise, with vehicle thefts up 44% since 2020 and robberies involving firearms up 57% over the same period.

Beverly Hills — that’s where you want to be (according to Weezer, at least) — if you can afford it.

The median rent is almost $3,000 over what the average American pays for a two-bedroom apartment. But Beverly Hills might just be worth it if you’re looking for a luxurious lifestyle and can afford the high cost of living.

Culver City is known for its major movie and television studios — it’s the site of Sony Pictures, among other production companies — and it has also become a major tech hub, which makes it great for people who work in those industries.

And you would have to work in those high-paying industries in order to afford to live in Culver City. With a median rent rate of $4,059 for a two-bedroom apartment, it’s not much cheaper than Beverly Hills.

The neighborhood is located near the western portion of Echo Park and features its own selection of bars, restaurants, and entertainment options. And, with a high walkability score and A-rated schools, Culver City is a great fit for high-earning families with young children.

Echo Park is a trendy L.A. neighborhood that’s home to Dodger Stadium. It’s located right in the center of L.A. and features hip restaurants, bars, and cafes, as well as vintage boutiques and proximity to other popular L.A. neighborhoods.

Residents who prefer to spend time outside can also enjoy scenic Echo Park Lake, Elysian Park, and the architecture of Victorian homes in Angelino Heights.

Echo Park is significantly cheaper than most surrounding neighborhoods, with a median rent of $2,950 per month — though that amount is still over double what the average renter pays in the U.S.

This affordable (for L.A.) neighborhood’s downsides are that it’s not nearly as walkable as the other neighborhoods on our list, without much public transit to choose from. It’s tied for the lowest school district rating of the other L.A. neighborhoods we examined.

Los Feliz is a trendy, artsy neighborhood in Los Angeles. It’s home to famous spots like Griffith Observatory, the L.A. Zoo, and the Autry Museum of the American West.

Like Echo Park, Los Feliz is a great place to take in views of downtown L.A., and it’s known for its art galleries and music venues, which makes it perfect for those who want a classic but trendy neighborhood.

Although the median rent is $3,292 for a two-bedroom apartment — around $2,000 more than the average rent in the U.S. — it is actually more affordable than many other places in the L.A. area. Los Feliz also features iconic L.A. architecture, including bungalows, Spanish-style homes, and Ennis House, Frank Lloyd Wright’s Mayan Revival design.

With a walkability score of 91 and a decent public transit core, Los Feliz is a walker’s paradise. Consider Los Feliz if you want a laid-back neighborhood that’s also home to trendy amenities and classic L.A. attractions.

Located northeast of downtown Los Angeles, Pasadena is famous for its picturesque neighborhoods and for hosting the Rose Bowl and its iconic parade.

The neighborhoods in Pasadena are some of the most desirable in the L.A. area, with a beautiful mix of Victorian and art deco designs. Historic Old Pasadena features more than 200 shops and boutiques, as well as museums, galleries, and dining options.

San Gabriel is nestled in the San Gabriel Valley to the northeast of Los Angeles and is known for its beautiful architecture (some of the oldest in the U.S.), excellent schools, and walkable neighborhoods.

San Gabriel has an excellent school rating (A) and the lowest median monthly rent of any of the neighborhoods on our list, which makes it one of the best options for people who might not be able to afford the luxury of Beverly Hills and Venice.

The neighborhood is also home to attractions like Grand Central Market, the annual 626 Night Market, and the Huntington Library, Art Museum, and Botanical Gardens.

San Gabriel is also home to a number of temples, including the renowned San Gabriel Mission. It’s a great place to live if you're looking for a relatively affordable, culturally diverse neighborhood with good transit options and fantastic schools.

Santa Monica is a coastal neighborhood known for its beautiful beaches and world-famous pier.

Home to celebrities, shopping, and a huge selection of excellent dining spots, the area is also close to major tech companies and only a few minutes from Los Angeles. When it comes to family life, the area is very walkable and the schools in the Santa Monica-Malibu Unified School District are rated among the best in California.

As with other popular parts of California, Santa Monica’s beauty comes with a hefty price tag. For those who can afford it, however, the area is great for everyone from young professionals to retirees.

Sandwiched between Echo Park and Los Feliz, Silver Lake is a trendy neighborhood in east-central Los Angeles that’s known for its hipster scene and picturesque homes. Sometimes called the Brooklyn of Los Angeles, the area is extremely LGBTQ+-friendly, and residents can enjoy a range of coffee shops, vegan restaurants, music venues, and museums.

It’s also among the more affordable neighborhoods in L.A., though that still comes with a median monthly rent of $2,950 for a two-bedroom apartment.

Residents who prefer to relax in nature can enjoy the Silver Lake Reservoir Complex and its dog park, basketball court, and other recreational areas. Silver Lake is also extremely walkable and perfect for young couples and families looking for an urban neighborhood with plenty of amenities.

Just south of Santa Monica, Venice Beach is most famous for its gorgeous beaches, eclectic boardwalk with fortune tellers and performers, and the incredible selection of shops and eateries along Abbot Kinney Boulevard.

The area has a high walkability score, so residents can easily explore the sidewalks and bridges along the Venice canals and Ocean Front Walk.

Because the area contains some of the best beaches in California, if not in the world, Venice is even more expensive for renters than Beverly Hills. It’s not in many people’s budget, so take that into consideration before planning on moving here.

West Hollywood — or WeHo — is home to vibrant nightlife, a wide selection of celebrity-owned restaurants, boutique and high-end shopping, as well as its thriving LGBTQ+ community.

WeHo is the site of the HBO Emmy party and L.A. Pride. The neighborhood is also famous for iconic music venues like Troubadour on Santa Monica Boulevard and Whisky a Go Go on the Sunset Strip.

The area is easy to navigate on foot or by public transportation, so residents can ditch their cars as they enjoy the comedy clubs and even the West Hollywood Halloween Carnaval, which is the largest Halloween street party in the world.

👋 Next steps: Talk to an expert!

If you're weighing your options for buying or selling a house, our friends at Clever can help! Clever's licensed concierge team is available to answer your real estate questions, or help you find the right agent for your needs.

Plug in your ZIP code below to find top agents near you!

Frequently Asked Questions About the Best Neighborhoods in Los Angeles

Where in L.A. should I live?

Where you should live in L.A. depends largely on your budget. If you can afford to live in luxury neighborhoods like Beverly Hills, then that’s definitely the place to be. But if you prefer more affordable neighborhoods, San Gabriel, Silver Lake, and Echo Park might be a better choice. Learn more about the best neighborhoods in Los Angeles.

Yes, East Hollywood is relatively safe. According to crime data from the L.A. Times, East Hollywood actually has lower crime rates than its surrounding areas. Check out our list of the top 10 neighborhoods in Los Angeles to learn more.

Where do young professionals live in Los Angeles?

Young professionals in Los Angeles tend to live in more affordable neighborhoods like Silver Lake and Echo Park. Most young professionals aren’t swimming in cash. And to avoid a commute, there are a fair amount in the entertainment and tech industry who live in Los Feliz, which is a tech hub and where most of the production studios are located. Check out our list of the top 10 neighborhoods in Los Angeles to learn more.

PreviousThe 5 Best Places to Buy Rental Property in MinnesotaNextThe 10 Best Neighborhoods in San Jose, Based on Rent, Amenities, and More