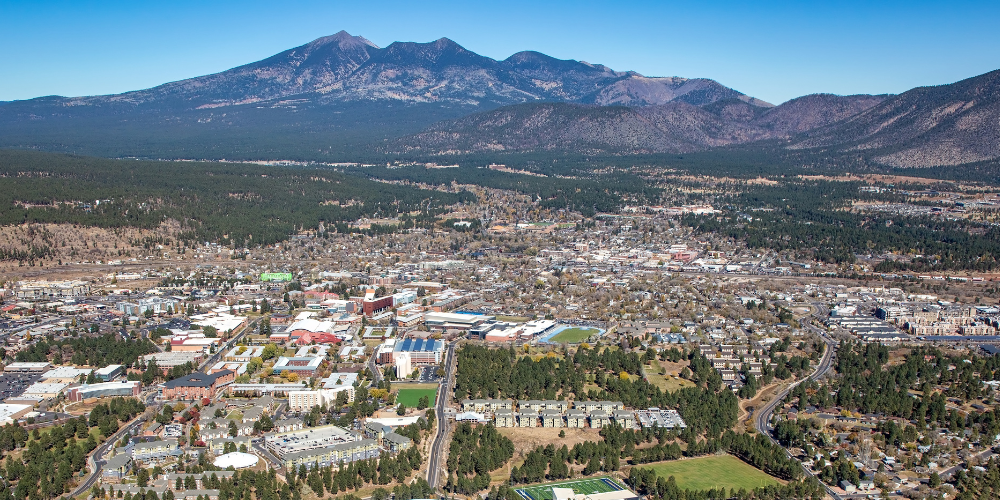 Dry heat, year-round sunshine, and very little snow — it’s no wonder that the Grand Canyon State is one of the best places to retire in the U.S. In fact, according to a 2020 study using U.S. Census data, Arizona is the second-most popular retirement state, just behind Florida.

And Arizona offers some things that Florida can’t — like Grand Canyon tours, a gorgeous desert landscape, a fairly low cost of living, and even skiing and snowboarding in the winter.

People are coming to retire in Arizona in droves, and they like what they see. From sprawling Phoenix to cozy Prescott, Arizona offers a thriving retiree community, excellent climate, and something for everyone.

Although home values in the state have risen steeply over the past decade, there are still pockets of affordability, a few of which we touch on in the list below.

We evaluated the best Arizona cities for retirees according to publicly available data on:

Then, we ranked the top five according to how good they are for retirees. Learn more about our methodology.

Whether you’re deciding on a city in Arizona or you’re hoping to find a good retirement community in a specific city, you’ll need some insider perspective — something hard to get if you don’t currently live nearby.

If you're looking for a local realtor who can provide on-the-ground insights into Arizona's best retirement cities, our friends at Clever Real Estate can help. Clever offers a free service that matches you with the best real estate agents from Keller Williams, RE/MAX, Century21, and other top-rated brokers.

In Arizona, you can get up to 0.5% cash back after closing — just for finding a fantastic real estate agent through Clever! And if you need to sell your current home, Clever can introduce you to local agents who work for pre-negotiated listing fees of just 1%. The average Clever seller saves $9,000!

Arizona is a moderate tax state. The Tax Foundation recently ranked it 23rd in the nation for low taxes.

However, it’s not quite as friendly for retirees as other states. The state doesn’t tax Social Security, but it does tax retirement distributions like 401(k), IRA, or pension payouts.

Property taxes are fairly low in Arizona, and residents who are 70+ years old can defer their property taxes if they’ve lived in Arizona for 10 years or in their principal residence for six years, with an income limit.

Sales tax in Arizona is fairly high compared to the national average, but groceries and prescription medications are exempt from sales tax.

Arizona’s health care system is one of the best in the nation (ranking fourth out of the 50 states in a recent study). And quality health care is affordable and widely available for most Medicare recipients.

The average monthly Medicare Advantage premium in Arizona is only $11.64, and the lowest monthly premium is $7.50 for a stand-alone prescription drug plan.

The average PTI in Arizona is 7.3 — so the average Arizona resident would have to work over seven years in order to afford a home. That means it's difficult for the average person to buy a house in the state.

How to Choose the Best Place to Retire in Arizona

Every person is unique, so you might be looking for a very different atmosphere than another retiree. But whether you’re looking for decent health care or plentiful outdoor activities, we’ve put together a list to help you narrow down your choices.

Buying a house in a different city or state can be tough when you aren’t familiar with the local market. A good local real estate agent will know the market front-to-back, and they’ll help you find the perfect neighborhood and home for you.

Our friends at Clever Real Estate make it simple to find the best Arizona real estate agents from top-rated brokers such as Keller Williams, RE/MAX, and more. Their fully licensed concierge team will learn about your preferences and goals to connect you with the right agents for your specific needs.

The Best Places to Retire in Arizona

This mid-sized Arizona city is one of the very best retirement cities in Arizona, if not the entire U.S.

What makes Flagstaff so good for retirees? Let’s start with the fact that it has the most high-quality in-network Medicare hospitals in a 50-mile radius per 100,000 residents of any city in the state. That means you’ll have access to some of the best health care in the country.

Flagstaff is far and away the best city on this list in terms of recreation, especially if you love being outdoors. It’s home to tons of national monuments, caves, forests, and even Grand Canyon tours. It also has the most golf courses, arts spaces, music venues, tours, and hiking spots, per capita, of any city on this list.

And while Flagstaff home values are on the high end, it has the lowest property taxes of any city on this list, along with the second-cheapest average utility costs, suggesting that the overall cost of living is very favorable.

And finally, Flagstaff has the lowest average summer temperature (64.8 degrees Fahrenheit) of any city on this list — a very big deal to anyone who’s experienced the scorching Arizona summers!

Retirees in Prescott are in good company — an extraordinary 41% of the population is 60+ years old.

While Prescott home values are definitely on the high end, property taxes here are low, and you get a lot for your money.

Prescott’s a great all-around city for retirees, easily earning the second-place spot on this list.

This small Arizona border town offers a low cost of living, with incredibly affordable homes, low utility costs, and an average meal-for-two cost of only $30 – easily the lowest of any city on this list. It’s right on the Mexico-U.S. border, which is probably why it is so affordable compared to the other cities on this list (and perfect for those who like to visit our southern neighbor).

But just because it’s not expensive doesn’t mean you have to sacrifice quality. Nogales offers the highest-rated retirement homes of any city on this list and a population of 60+-year-old residents that’s well above the national average.

Nogales also has excellent recreation options. The city has the most art galleries and museums per capita, as well as the highest-rated arts spaces and music venues on this list.

The only substantial drawback of retiring here is that there are, unfortunately, no 4 or 5-star-rated in-network Medicare hospitals in a 50-mile radius. It is also located far away from some of the larger Arizona cities that offer great health care.

If you’re dreaming of a retirement spent strolling along unpolluted, cozy, village-style neighborhoods, Tucson is your best option in Arizona. It has the highest walkability score of any city on this list, and public transportation here is cheap, so you won’t need a car if you don’t want one.

Finally, you’ll never be bored in Tucson. You can explore the Sonoran Desert and Saguaro National Park, attend the opera, rent a boat on a lake, go white-water rafting, or rock climbing.

Tucson also has the most senior centers per capita of any city on this list, along with the most stadiums and arenas, and the second-most arts spaces.

Tucson has a population of well over 500,000, and a large retiree community.

Incredibly, it’s also affordable, with the second-lowest average home value on this list, and a recent history of gradual housing price increases, in stark contrast to the explosive growth in much of the rest of the state.

As the capital and largest city in Arizona, it should come as no surprise that Phoenix leads in several categories. Phoenix has the most high-quality hospitals per 100,000 residents of any city on this list.

Phoenix also boasts the highest average winter temperature, at 57.5 degrees Fahrenheit — so you can leave your down parkas and electric blankets behind when you retire to Phoenix.

Phoenix also offers great tours and day trips, if you’d like to explore the beautiful botanical gardens, take a day trip to the Grand Canyon, or take a sunrise hot air balloon ride across the beautiful desert landscape. The city is surprisingly walkable, with the second-best walkability rating, behind only Tucson, and it also boasts the most bingo halls per capita.

Phoenix has the second-most senior centers, which are very highly rated with an average Yelp rating of 4.38 stars.

If Phoenix has a drawback, it’s that home values are very high here, and have been trending steeply upwards for the past decade. That said, property taxes here are relatively low.

Not Sold on Arizona? Consider These Alternatives

Miami, Florida. This vibrant, diverse city is a little faster-paced than Arizona and can be pricey – but it offers unparalleled culture and recreation, and a huge retiree community.

Austin, Texas. A world-class arts and tech hub, Austin has it all for retirees looking for excitement and stimulation in their golden years.

Our friends at Clever Real Estate have already negotiated with Arizona's best realtors to give you low listing fees of just 1% (a fraction of the standard 3%). In fact, the average Clever customer saves $9,000 on their home sale! That’s thousands back in your pocket to help you cover moving expenses, splurge on your grandkids, or simply save for a rainy day.

Home Bay compared 5 popular Arizona cities across a number of metrics, listed below. Each metric was normalized and then graded on a 100-point scale. The combined weighted average of the scores determined the “retirement city” score upon which the final ranking was based.

Is Arizona a good place to live?

Arizona is a great place to live, especially if you like year-round sunshine and national parks like the Grand Canyon. The cost of living is generally low, though housing costs have gone up. Here are the best places to retire in Arizona.

Weather in Arizona can vary pretty widely depending on which part of the state you’re in, but it’s known for sunshine year round, with warm to blazing summers and mostly mild winters. Check out our list of the top five places to retire in Arizona.

Why is everyone moving to Arizona?

Arizona is one of the top U.S. retirement destinations, just behind Florida – and it’s easy to see why. The state offers affordable living, plenty of national parks like the Grand Canyon, warm weather and sunshine, and some of the best health care in the nation. Check out our list of the top five places to retire in Arizona.