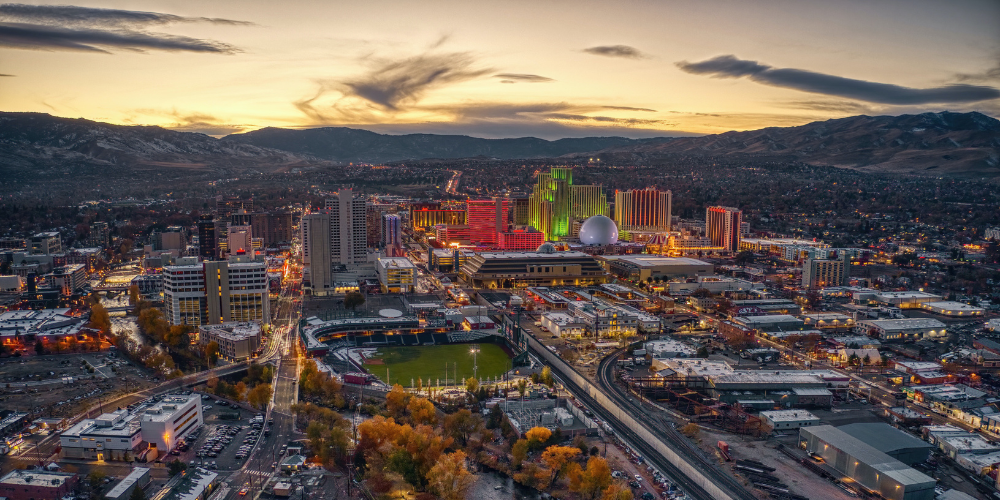 Vegas might be known for a whole city’s worth of attractions and entertainment, but Sin City is just the tip of the iceberg when it comes to everything Nevada has to offer retirees.

The state has more than 160 assisted living facilities, affordable medical care, and a large number of residents over 50 years old — over one-third of the population.

The best places to retire in Nevada include big cities like Las Vegas and Carson City, as well as quieter areas like Pahrump.

We evaluated the best Nevada cities for retirees using publicly available data on:

Then, we ranked the top four according to how good they are for retirees. Learn more about our methodology.

Whether you’re unsure which city you prefer or you’re hoping to find a good retirement community in a specific city, you’ll need some insider perspective — something hard to get if you don’t currently live nearby.

If you're looking for a local realtor who can provide on-the-ground insights into Nevada's best retirement cities, our friends at Clever Real Estate can help. Clever offers a free service that matches you with the best real estate agents from Keller Williams, RE/MAX, Century21, and other top-rated brokers.

In Nevada, you can get up to 0.5% cash back after closing when you buy a house — just for finding a fantastic real estate agent through Clever! And if you need to sell your current home, Clever can introduce you to local agents who work for pre-negotiated listing fees of just 1%. The average Clever seller saves $9,000!

Nevada is generally a low-tax state. In fact, the Tax Foundation recently ranked it seventh in the nation for low taxes. And the tax situation is even better for retirees.

Nevada doesn’t tax Social Security benefits or retirement distributions like 401(k), IRA, or pensions. This makes the state a good option for those who want to maximize their retirement savings and get the most out of their budget.

Nevada does charge a state sales tax of 6.85% — higher than the national average of just over 5%. But local sales tax rates max out at 1.53%, which is lower than most other states.

Retirees who still plan to work part-time or have a side hustle will be happy to hear that Nevada does not chargean individual income tax or a corporate income tax. Still, business owners are responsible for paying a gross receipts tax that varies by industry.

Nevada’s health care system isn’t highly regarded (ranking 37th out of the 50 states in a recent study), but health care is incredibly affordable and widely available for most Medicare recipients.

When it comes to premiums, however, Nevada shines. The average monthly Medicare Advantage premium in Nevada is only $3.41, while the lowest monthly premium is $7.30 for a stand-alone prescription drug plan.

Price-to-income is a formula used to determine an area’s affordability based on home prices and household income. It represents the number of years of income it would take to have enough to buy a house.

The average PTI in Nevada is 7.8 — so the average Nevada resident would have to work almost eight years in order to afford a home, one of the highest PTI ratios in the country. That means it's extremely difficult for the average person to buy a house in the state.

How to Choose the Best Place to Retire in Nevada

Every person is unique, so you might be looking for a very different atmosphere than another retiree. But whether you’re looking for decent health care or plentiful outdoor activities, we’ve put together a list to help you narrow down your choices.

Buying a house in a different city or state can be tough when you aren’t familiar with the local market. A good local real estate agent will know the market front and back, and they’ll help you find the perfect neighborhood and home for you.

Finding an agent you like and trust doesn’t have to be hard or time-consuming. Our friends at Clever Real Estate make it simple to find the best Nevada real estate agents from top-rated brokers such as Keller Williams, RE/MAX, and more. Their fully licensed concierge team will learn about your preferences and goals to connect you with the right agents for your specific needs.

The Best Places to Retire in Nevada

Carson City is the capital of Nevada and the best city on our list for retirees who want an excellent quality of life.

The vibrant city borders Lake Tahoe, making it a top choice for recreation and outdoor enthusiasts, as well as art lovers and concertgoers. It has the highest number of art classes, music venues, bingo halls, performing arts spaces, golf facilities, and museums per 100,000 residents of any city on our list. Carson City also has a huge selection of tours covering interests like art, architecture, and wine.

The Silver State’s capital is also excellent for health care access and boasts the most quality, in-network Medicare hospitals of the cities we considered.

For residents who want to build a local community, the city has the most senior centers per 100,000 residents, and 28% of the population is age 60 or over — the second highest on our list.

Retirees who spend their golden years in Carson City also benefit from the lowest property tax rate of our four top cities, and the lowest average summer temperatures (about 70 degrees Fahrenheit).

Reno is second on our list because of its wide selection of art galleries, art classes, music venues, Wild West historical sites, and stadiums. Art lovers can also enjoy the local Nevada Museum of Art, a 70,000-square-foot facility featuring works by famous artists like Grandma Moses.

The city is also home to the second most botanical gardens per 100,000 residents, as well as the second-highest recreation score. Retirees can enjoy the outdoors more days out of the year, as the average summer temperature in Reno is just over 80 degrees Fahrenheit (though that is increasing with climate change).

Retirees are also in good company in Reno. More than 20% of the population is 60+ — 10% higher than the average U.S. city. Plus, Reno’s retirement communities are well rated, with an average of 4.4 stars.

Social butterflies will love spending their retirement in Pahrump because of its thriving retiree community. In fact, 39% of the population is 60 or over — 86% higher than the average U.S. city and the highest on our list.

Relative to other cities in Nevada, the small city of Pahrump has more affordable real estate. While home values have increased significantly over the last 10 years, they haven’t jumped quite as high as other cities on this list.

The city is located an hour west of Las Vegas along the Nevada-California border and has more than 35 local hiking trails for exploring. The adventurous aren’t far from hot spots like Death Valley National Park and Mojave National Preserve.

Pahrump is also home to numerous museums and golf facilities. In fact, Pahrump could have easily beaten the two cities ranked above it if it weren't for its high property taxes and lack of highly-rated hospitals nearby.

As the most populous city in Nevada, Las Vegas isn’t everyone’s idea of the perfect retirement town. But for retirees who want access to world-class entertainment and recreation, Sin City could be the perfect fit.

Even if you’re not into gambling, you can take advantage of the city’s highly-rated performing arts spaces and stadiums, which have Yelp ratings of 4.40 and 3.83 stars, respectively. You can also take a day trip to the Hoover Dam and multiple national parks close by.

Residents also enjoy the second-most tours per 100,000 residents of any other city on our list, as well as the second-highest walkability score. Plus, the property tax rate is 51% lower than the U.S. average, so your retirement savings will go further with more to spend on living your best retired life.

Note that Las Vegas has no Medicare hospitals with 4- and 5-star ratings by the Centers for Medicare & Medicaid Services (though it does have hospitals with 2- and 3- star ratings). So we don’t recommend it for retirees who want to prioritize the highest quality care.

Not Sold on Nevada? Consider These Alternatives

Taos, New Mexico. Taos is a beautiful mountain town with access to hiking, fishing, skiing, and other outdoor activities. The town also has ample medical facilities and recreation centers.

El Paso, Texas. El Paso is one of the most affordable cities to retire in the U.S. with low median home prices. Nature lovers will also benefit from the city’s location along the Rio Grande, access to Franklin Mountains State Park, and proximity to Mexico.

Our friends at Clever Real Estate have already negotiated with Florida's best realtors to give you low listing fees of just 1% (a fraction of the standard 3%). In fact, the average Clever customer saves $9,000 on their home sale! That’s thousands back in your pocket to help you cover moving expenses, splurge on your grandkids, or simply save for a rainy day.

Home Bay compared 4 popular Nevada cities across a number of metrics, listed below. Each metric was normalized and then graded on a 100-point scale. The combined weighted average of the scores determined the “retirement city” score upon which the final ranking was based.

What’s the distance from Reno to Las Vegas?

Reno is 438 miles from Las Vegas. Driving from one city to the other takes nearly seven hours. Here’s why we ranked Reno higher than Las Vegas on our list of places to retire.

What are the pros and cons of retiring in Nevada?

Nevada has extremely low taxes, lots of sunshine, and an incredible amount of recreation and entertainment opportunities, both indoors and outdoors. However, the weather can be dry and hot, there isn’t consistent access to high-quality Medicare hospitals, and home prices are higher than other popular retirement states like Arizona. Learn more about retiring in Nevada.

Is it better to retire in Nevada or Arizona?

Arizona is better for retirement than Nevada. Nevada and Arizona are both top retirement destinations, but Arizona has much better access to health care with more affordable housing and a lower cost of living. However, if you want to be close to the thrills of Las Vegas and Reno during your retirement, Nevada might be the place for you. Read our list of the best places to retire in Nevada.

In Reno, the weather is mostly sunny, hot, and dry in the summer and cold and cloudy in the winter. Learn more about Reno and other top places to retire in Nevada.

PreviousWhat Is the Average Realtor Commission? (2022 Data)NextThe 5 Best Places to Retire in Arizona, Based on Taxes, Amenities, and More