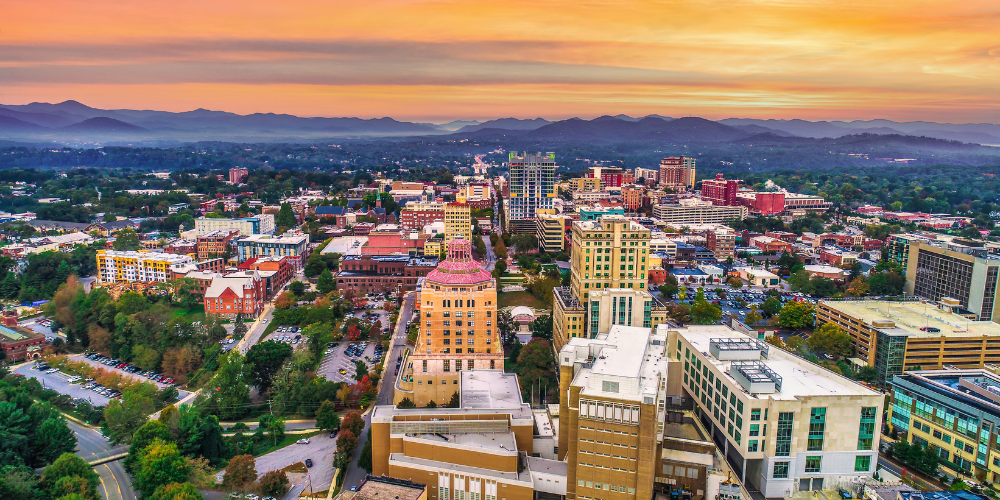 North Carolina has become an increasingly popular destination for retirees, ranking in the five most popular U.S. states to retire to, according to data from the U.S. Census Bureau. And it’s no wonder! With mountains, harbors, lakes, beaches, and a thriving city life, no matter what kind of retirement community you’re looking for, North Carolina is sure to have it.

The retirement community is so large that retirees have earned the local nickname “halfbacks,” because many of them move from the northern states but don’t want to live in the Florida heat, so they go “halfway back” to where they came from.

Of course, once they’re there, they fall in love with North Carolina’s beautiful scenery, mild weather, flourishing economy, and friendly population.

In fact, cities like Raleigh, Asheville, and others offer some of the best retirement experiences not only in the state of North Carolina but in the entire nation.

So how did we evaluate these North Carolina cities? In our study, we looked at data points including:

Then, we ranked the top five according to how good they are for retirees. Learn more about our methodology..

If you’re still not sure which city you prefer or want to find a good neighborhood or retirement community in a specific city, you’ll need some insider perspective — something hard to get if you don’t currently live nearby.

A local realtor can be a great resource for on-the-ground insights. Our friends at Clever can match you with top real estate agents to help you find your perfect retirement city, sell your current home, and start your new life by buying a home in a new area.

North Carolina is an average-level tax state, and there’s no estate or inheritance taxes.

A recent study by the Tax Foundation ranked North Carolina 23rd out of the 50 states, with a total state-local tax burden of 9.9%. And local taxes are slated to drop every year until 2027.

North Carolina isn’t known for its excellent health care system (ranking 39th out of the 50 states in a recent study), but health care is affordable and highly accessible for Medicare recipients — which applies to the majority of retirees.

The average monthly Medicare Advantage premium in North Carolina is only $15.22, and the lowest monthly premium for stand-alone prescription drug plans (Medicare Part D) is only $7.

North Carolina has a healthy number of medical personnel (11,157), which comes out to an impressive 107.42 Medicare certified providers per 100,000 state residents.

How to Choose the Best Place to Retire in North Carolina

Every person is unique, so you might be looking for a very different atmosphere than another retiree. But whether you’re looking for decent health care or beach access, we’ve put together a list to help you narrow down your choices.

Buying a house in a different city or state can be tough when you aren’t familiar with the local market. A good local real estate agent will know the market front and back, and they’ll be able to help you find the perfect neighborhood and home for you.

Finding an agent you like and trust doesn’t have to be hard or time consuming. Our friends at Clever Real Estate make it simple to find the best Florida real estate agents from top-rated brokers such as Keller Williams, RE/MAX, and more. . Their fully licensed concierge team will learn about your preferences and goals to connect you with the right agents for your specific needs.

The Best Places to Retire in North Carolina

Asheville has the highest senior population of any city on this list — 30% of Asheville residents are 60+ years old. That’s nearly 43% higher than average, so this is truly an exceptional retiree community. Its retirement homes also have the highest rating on this list (3.75 stars on average).

And that’s just scratching the surface of Asheville’s appeal. You’ll never be bored if you retire in Asheville! The city has the most art galleries, tours, music venues, hiking options, art classes, flea markets, botanical gardens, and senior centers, per capita, of any place on this list.

The city also has the highest walkability score and the lowest property taxes on this list.

Asheville also has excellent health care, with 1.5 highly rated in-network Medicare hospitals per 100,000 residents in a 50-mile radius, so you’ll never have to wait long for an appointment.

Finally, Asheville has the lowest average summer temperature on this list, at just 74 degrees Fahrenheit; you may not even need an air conditioner if you live here!

Out of all the cities on our list, Hickory ranks first for affordability. Home values here are very reasonable and have seen only gradual increases over the last decade. Property taxes are well below average here, as are the rock-bottom average prices for utilities.

It also has hundreds of acres of picturesque hiking trails, a great lake for boating, a nationally recognized furniture mart for handmade pieces, and a world-famous short track that has seen the rise of many NASCAR stars. The city offers the most golf options per capita of any city on our list.

Hickory has the highest count of high-quality in-network Medicare hospitals (13) on this list, as well as the highest rate per 100,000 residents, which translates to best-in-class access to medical facilities and providers.

Chapel Hill is a college town surrounding University of North Carolina at Chapel Hill, so it offers a lot of quality-of-life advantages found in cities built around universities — the city has the second-highest walkability score on this list and its public transportation is free.

But you don’t need to be a coed to enjoy the city. Like most college towns, Chapel Hill has a lot of museums (28), live musical performances, and lots of retail shopping and restaurants.

Chapel Hill also excels when it comes to retiree-specific amenities (including the most bingo halls, per capita). The retirement homes here have the second-highest average rating on this list (3.57 stars).

One thing to watch out for: Chapel Hill has more hospitals within a 50-mile radius than the national average (0.8 vs. 0.3 per 100,000 residents), but fewer than other cities on our list.

Greensboro really stands out in housing affordability and golf.

Despite the fact that it’s the third-most populous city in North Carolina, home values are well below the national average and have increased by only 91% over the last decade, the second-lowest increase of any city on this list. Utility costs are very low too, and estimated property taxes are only 0.98%.

Also known as “Tournament Town” for its abundance of stadiums, courts, and golf venues (29), so sports fans will have plenty to do here. Health care access is also better than average here, with 0.9 high-quality hospitals, per capita, in a 50-mile radius. (That's triple the national average of just 0.3 quality hospitals per 100,000 residents).

Raleigh has the highest overall recreation score of any city we studied. Along with the gorgeous trees and hiking spots it’s famous for, the “City of Oaks” is home to the most arts and theater spaces (40), bingo halls (4), and the second most art galleries per capita on this list.

Although the retirement communities are not rated very high, there is a wide variety of active 55 and over communities and retirement homes within the city to choose from.

Raleigh isn’t the most affordable city on this list. Home values are on this high side, after several years of precipitous increases that have taken them well above the national average. However, you definitely get a lot for the price tag. The property taxes are very low, and the average cost of a meal for two ($60) is the lowest on this list.

The climate is exceptionally mild here, too, with an average winter temperature of a balmy 44 degrees Fahrenheit, tops on this list.

Not Sold on North Carolina? Consider These Alternatives

If you’re not sold on what North Carolina has to offer, consider these other retiree destinations that might offer more of what you’re looking for!

Sarasota, Florida. This sunny city has a huge retiree population, excellent walkability, and everything from botanical gardens to golf courses.

Miami, Florida. This world-class city is a destination for retirees and everyone else. While property values are a little high, Miami has a large retiree population, a light tax burden, and vibrant culture to keep you young.

Our friends at Clever Real Estate have already negotiated with North Carolina's best realtors to give you low listing fees of just 1% (a fraction of the standard 3%). In fact, the average Clever customer saves $9,000 on their home sale! That’s thousands back in your pocket to help you cover moving expenses, splurge on your grandkids, or simply save for a rainy day.

Home Bay compared five popular North Carolina cities across a number of metrics, listed below. Each metric was normalized and then graded on a 100-point scale. The combined weighted average of the scores determined the “retirement city” score upon which the final ranking was based.

Where are 55 and over communities in North Carolina?

Raleigh has the widest selection of 55 and over communities in North Carolina, shortly followed by Charlotte and Wilmington. Check out our list of the top five places to retire in North Carolina based on taxes, amenities, and more.

Is North Carolina a good place to retire?