Is San Diego Safe? | Best San Diego Neighborhoods | Where We Found Our Data 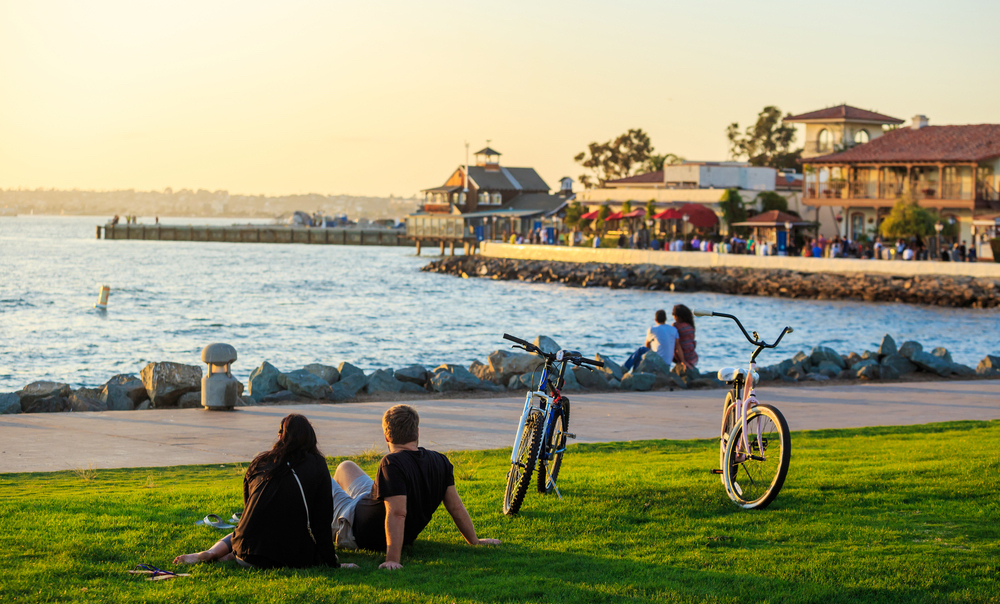 San Diego is the quintessential Southern California beach city: a diverse, bustling metropolis (it’s the second largest city in the state) with some of the best beaches in California, if not the world. A booming job and real estate market make San Diego one of the most desirable places to live in the country.

This is a city with something for everyone, from quiet Point Loma, to laid-back Encinitas, to swank La Jolla. Just keep in mind that it’s not cheap — the average home value in San Diego is a whopping $981,548, nearly triple the national average. Locals call the high cost of living in the city the “sunshine tax.” It’s the price you pay to live in a place where everyone wants to live.

So what are the best neighborhoods in San Diego? We’ll cover the top ten San Diego neighborhoods (in no particular order) in detail below, with data to explain why we picked them. Learn more about where we found our data.

If you’re considering moving to San Diego, you’ll need an experienced local real estate agent to help you figure out which neighborhood is right for you. That’s why we’ve partnered with Clever Real Estate.

Clever can connect you with top agents in San Diego from major brokerages like Keller Williams, RE/MAX, and more. And in California, you can get up to 0.5% cash back after closing on a house, just for using a Clever agent. On a million-dollar home, that’s $5,000 back in your pocket.

The housing market in San Diego isn’t known for being cheap, so any bit of cash back can help!

San Diego is one of the safest cities in California.

San Diego also has a lower crime rate in every category of property crime than both the state and national averages, except motor vehicle theft, which occurs at a higher rate in San Diego than it does nationally.

San Diego is one of the safest cities in the state, with far lower crime rates than cities like Sacramento, Los Angeles, and San Jose. Crime rates also vary widely between neighborhoods. And looking back over the previous decade, crime in San Diego is trending decisively downwards.

Located next to downtown, Barrio Logan is San Diego’s main Latin-American and Mexican-American neighborhood. Its heart is Chicano Park, which sports the largest collection of Chicano murals in the world.

There’s also a thriving arts scene in Barrio Logan, with many art galleries and museums. Barrio Logan has a thriving dining scene too, with local breweries, restaurants, and coffee shops all serving authentic, Chicano-influenced fare.

Barrio Logan is also the most affordable place to live in the San Diego area for both renters and buyers, with a typical home value of $644,650 — around $300,000 less than the San Diego average.

For families who value diversity, this is the perfect neighborhood. Barrio Logan also features excellent schools and walkability.

Coronado: Best For Resorts and Beaches

Coronado is a long isle connected to the mainland by a thin strip of land. A group of investors purchased it during the late nineteenth century and turned the almost-island into a resort. Now, the Hotel del Coronado is the neighborhood’s crown jewel, a historic world-class hotel that draws guests from all around the world.

The rest of the neighborhood slowly sprung up around the hotel, and it evolved into a quiet, if very expensive, little village-style neighborhood. Many residents don’t own a car, preferring to walk, bike, or even take golf carts around.

Coronado features some stellar beaches. There’s also the Coronado Golf Course, which is one of the best public golf courses in the nation.

As a resort island, the real estate is pricey, since many homes are historic mansions originally built by wealthy families. In fact, Coronado has one of the highest average home values in the country — $2,696,150, close to eight times higher than the national average. And the monthly rental rate is just as high, at $5,810 per month, which is about four times the national average.

San Diego’s East Village is the city’s go-to neighborhood for eating, drinking, and shopping. With a ton of renovated old warehouse space to go with shiny new construction, many people say it has a vibe similar to Manhattan’s Soho.

The heart of the neighborhood is probably the half-billion-dollar Petco Park, home of the San Diego Padres. Like most stadiums, it’s surrounded by concentric rings of dining, bars, cafes, and nightlife. All this action makes East Village a favorite neighborhood for young professionals.

The typical home value is actually less than most of the surrounding neighborhoods, which makes it relatively affordable for prospective buyers, though the monthly rent is still quite high.

East Village is also extremely walkable and has great public transit with high-ranked school systems, which makes it great for families and retirees.

Encinitas is known as the “Flower Capital of the World,” with the San Diego Botanic Garden right in town, as well as many plant nurseries and other gardens. Its well-known beauty comes with a price tag of over $2 million for a typical home.

It’s a classic beach town with some of California’s finest beaches and surfing spots, as well as a walkable downtown that features everything from art galleries to meditation gardens.

Encinitas also has excellent schools, and its intimate vibe combined with the endless recreation options and green space makes it the ideal neighborhood for families. However, residents need to rely on driving because the city is not very walkable and doesn’t have much in the way of public transit.

Hillcrest is often referred to as the Greenwich Village of San Diego: eccentric, bohemian, tolerant, and diverse. Hillcrest’s Restaurant Row offers a wide variety of dining options, and the neighborhood features some of the edgiest boutiques in the city.

It’s home to Balboa Park, a 1,200-acre park with 16 museums, concert venues, gardens, art exhibitions, science exhibitions, and a wide variety of events all year long. Partially because of this giant, walkable park, the city has a great walkability score of 87, and the schools are also highly rated.

As far as affordability, the area’s high median monthly rent and typical home value are much higher than the national average, but par for the course in the San Diego area.

There are also great museums, nightclubs, a weekly farmer’s market, the best-rated bed and breakfast in San Diego, and a huge annual Pride festival. With all this going on, it’s best suited for young professionals and other adults who like a high-energy lifestyle.

La Jolla means “the jewel” in Spanish, and the neighborhood’s definitely a crown jewel of San Diego, with some of the city’s most expensive homes, as well as five-star restaurants, Lamborghini dealerships, and some of the most upscale shopping in San Diego.

Although it’s an affluent neighborhood, it’s not necessarily uptight — there’s a nude beach, and everyone democratically uses the beaches for surfing, swimming, scuba diving, sunbathing, or taking in the seals that flock to La Jolla Cove.

The neighborhood’s rental prices are second only to Coronado, but the typical home value is just a bit higher than surrounding areas. La Jolla also has great schools, so it’s great for families who can afford the price tag!

Little Italy is one of the oldest neighborhoods in San Diego. Originally an Italian-American fishing community, it’s evolved over time into a unique cultural attraction. It’s also hardly little — at 48 square blocks, it’s the largest Italian neighborhood in the U.S.

As you might imagine, Little Italy offers top-tier Italian dining, as well as gems like the Waterfront Bar, one of the oldest bars in San Diego and a former hangout for Italian fishermen. The neighborhood also has a very intimate feel, thanks to the neighborhood’s heart, the Piazza della Famiglia, as well as little touches like the trees that are planted every ten strides all over the neighborhood.

With great schools and some of the best walkability in San Diego, Little Italy’s a great choice for young families.

For a long time, Mission Valley had a reputation as a more functional neighborhood dominated by big box stores, car dealerships, and interchangeable apartment buildings. But in recent years, city planners have set out to give Mission Valley an upgrade.

Plans call for tens of thousands of units of dense housing, lots of manicured green space, and a walkable, village-style development. They even plan on rehabbing the grimy San Diego River into a nature preserve with walking trails.

Because of its unique circumstances, renting in Mission Valley is actually pretty pricey, but the neighborhood offers the most affordable homes of any neighborhood on our list, which makes it great for first-time home buyers who want to live in sunny San Diego.

Mission Valley is definitely a neighborhood on the rise, and the kind of community that’s being constructed is ideal for young families and professionals alike.

Pacific Beach (or “PB,” as it’s known to the locals) is another classic San Diego beach community. Most of the town life revolves around the water here, whether it’s at the three-mile long boardwalk, Crystal Pier that juts out into the Pacific, Tourmaline Surf Park, or the Mission Bay Aquatic Center, where you can wakeboard, waterski, paddleboard, surf, or sail.

Like most beach towns, it’s on the more expensive side as far as housing goes. The typical home value is just under $1.5 million, and median rent is $3,414, which is only a little higher than most neighboring areas, but is almost $2,000 more than the average rent nationally.

Away from the water, Pacific Beach has a flourishing nightlife that skews college-age. It’s a walkable, warm community, with very good schools.

While Point Loma is very close to downtown San Diego, it has the vibe of an isolated, almost suburban, little beach town. You can find everything from modest little cottages to huge multimillion-dollar mansions with private boat docks here, along with some of the quietest and most unspoiled beaches in San Diego.

While the north half of Point Loma is residential, the south half is protected parkland, featuring the Cabrillo National Monument, which commemorates the first landing of a European in California. This park offers some of the best hiking and views in all of Southern California!

The neighborhood is fairly walkable, and the schools are great, so it’s a perfect fit for families looking for a slow-paced neighborhood, if they can afford the typical $1,650,706 home in the area.

PreviousOfferpad Reviews: How It Works and How Real Customers Feel (2022 Update)Next9 For Sale By Owner Websites You've Never Heard Of (But Should Know!)